Athlete of the week - Sarah Rich 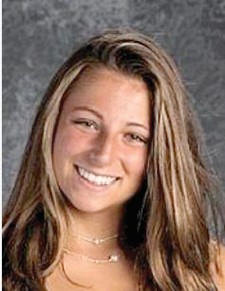 The Aroma Joe’s athlete of the week is Sarah Rich. The senior at Windham High School plays soccer and tennis.

Her sports heroes are Mia Hamm and Victoria Azarenka.

“Sarah has played a huge role in our girls tennis success this spring. The team is advancing to the quarterfinals and Sarah is competing in the individual state competition this weekend,” said her coach Jenna Willey.

Her philosophy on teamwork is “I have learned that different perspectives and contributors are important to achieving a common goal,” she said.

She balances school and sports well. “The structure provided by a full schedule helps me feel balanced and driven,” she said.

Her hobbies include Netflix, cooking and baking, working with animals and running.

She plans to go to college to study health sciences in the pharmacy or veterinary fields.

Sarah is the daughter of Kyle and Jill Rich. She has a brother Josh and two dogs Maggie and Cooper.
Posted by Michelle Libby at 7:38 AM No comments: 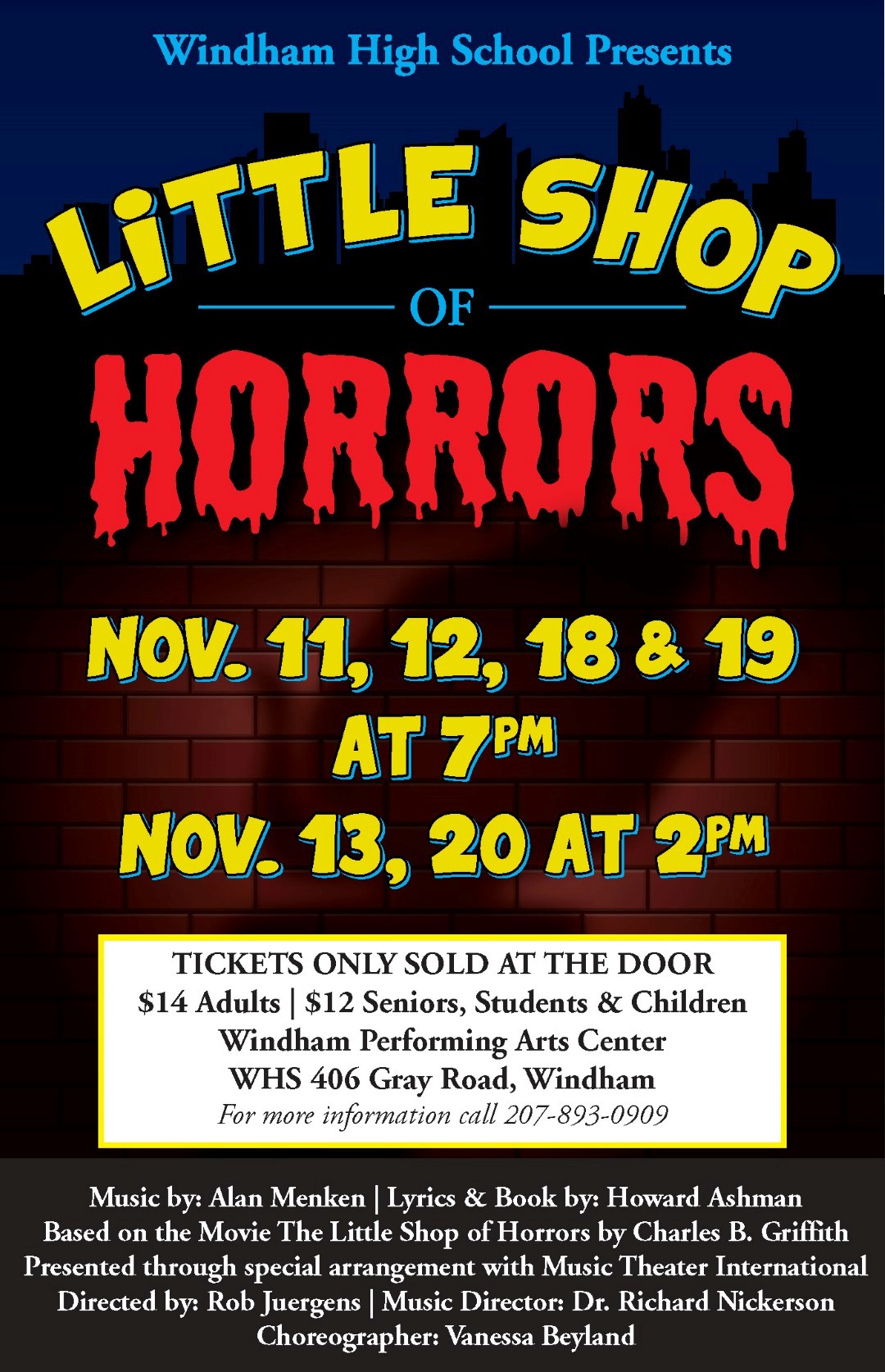 The All-Region awards are a new distinction in 2016 and go to top athletes in the each of the eight regions across Division III track and field. To be honored, an individual must rank in the top-five among athletes within their own region or on a top-three relay.

Rochester’s men’s team during the outdoor season was represented by four seniors in 2016 as Boubacar Diallo, Jeffrey Hrebenach, Jonathan Kuberka and Patrick Rice all ranked in the top five in Atlantic region competition in their respective events.

Rice (Windham, ME/Windham), a multi-event specialist, has enjoyed a fabulous senior season and earned his award in the decathlon. His season best performance in the 10-event competition was at the NYSCTC Multi-Event Championships where he took home first place with a score of 6,473 points. That score has Rice in the top 20 in NCAA Division III overall and qualified the senior for this week’s NCAA National Championships at Wartburg College in Waverly, Iowa. Earlier this season, Rice earned All-Region and then All-American honors in the heptathlon after his third place finish at the NCAA Indoor Championships.

Diallo (Bignona, Senegal/African Leadership Academy) is also a two-time All-Region honoree in 2016 as the senior earned the award in the triple jump in both the indoor and outdoor seasons. The 2015 outdoor All-American just missed qualifying for his second straight NCAA championship with his season long jump of 14.39 meters (47’2.5’’) which happened at the St. John Fisher Last Chance Meet on May 14. Indoors, Diallo earned All-Region recognition following a triple jump of 14.74 meters which earned him a berth at the NCAAs.

Hrebenach (Saratoga Springs, NY/Saratoga Springs) caps his Yellowjacket career with his first All-Region award from the USTFCCCA. The senior sprinter clocked in at 21.72 seconds in the 200 meter dash, setting a new school record at the NYSCTC Outdoor Championships. That time ranked him inside the top 45 nationally and was quick enough to rank among the top five in the Atlantic Region. He ends his career holding three outdoor school records (100m, 200m, 4x100m) as well as one indoors (4x200m).

Kuberka (Clarence, NY/Clarence), the Rochester indoor long jump school record holder, earned his All-Region honor following a 6.93 meter jump (22’9’’) that took place at the Division I laden Bucknell Bison Classic on April 16-17. During the outdoor season, Kuberka earned three podium spots at the NYSCTC Championships, coming in second in the long jump, fifth in the triple jump and eighth in the high jump.

Posted by Michelle Libby at 7:34 AM No comments:


Last week, the Hebron Academy junior varsity lacrosse team defeated The Hyde School 14-2 to win the Maine Association of Independent School Athletic Directors (M.A.I.S.A.D.) league. The team has a 10-1 record. With 15 players on the team, only four of them had ever played lacrosse before. 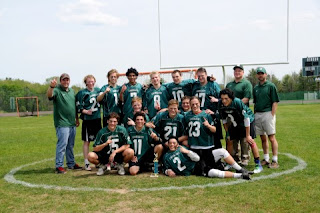 “The single most contributing factor to our success was the competitive nature of the athletes. They were driven to win and this motivated the new players to learn the basic skills very quickly so we could compete,” said head coach of the junior varsity team Steve Middleton. 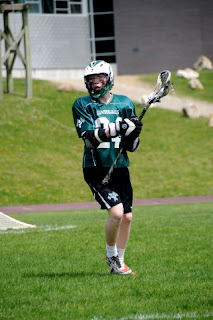 Among the 15 players on the team, they are from: Canada, Mexico, Czech Republic, Sweden, Germany, and in the U.S. - Florida, and locally we have two players from Poland, one from Minot and one from Auburn and Keith Mank from Raymond, said Middleton.

“Keith was one of the few experienced players on the team, and he did a great job anchoring the first midfield line. He was also our face-off expert and won 75 percent of face-offs this season,” he said.
In the league, they defeated The Kent's Hill School 12-1 in the semi-finals to advance to the finals. 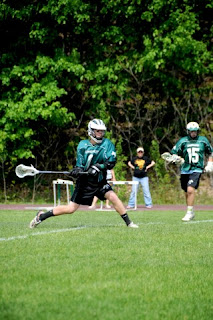 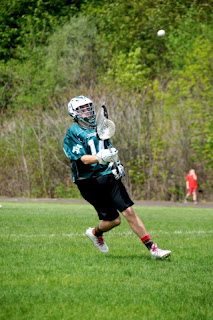 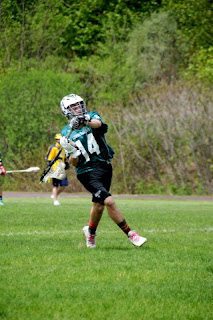 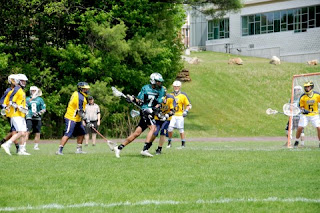 Posted by Michelle Libby at 7:27 AM No comments: 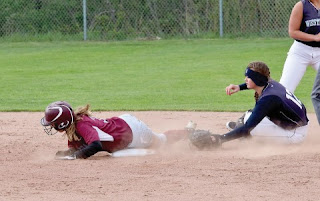 After returning from their Florida trip, Windham softball lost to Biddeford 12-6 and since has gone undefeated.
In the past week, Windham defeated Marshwood 13-6, Westbrook 12-0 and Westbrook again 15-8.

Last Saturday, Marshwood visited Windham and the Eagles turned on the offense and the defense. Danielle Tardiff led the Eagles on the hill allowing four earned runs and generating five runs batted in and scoring two. Tardiff struck out eight and allowed six hits.

On Monday, Westbrook visited for the first of two battles against the Eagles. Danielle Tardiff hurled a shutout, striking out twelve and the Eagle offense generated runs quickly to mercy run the Blue Blazes. Olivia Mora generated five runs batted in and scored two to lead the Windham offense. Danielle Tardiff also contributed scoring one run and batting in two.

Tuesday saw a different battery against Westbrook as Tardiff got a rest. However, that was only defensively speaking. Tardiff and Megan Joy each scored three runs and Alex Morang and Katie Hunter scored two each to help Windham get the 13-6 victory. Erin Elder, Katie Hunter and Lily MacPherson combined as pitchers to help Windham to their ninth victory.

Coming up, Windham will be facing McAuley on Friday the 20th away and then face Thornton Academy in Saco on Monday.

Coach Travis Demmons is optimistic about the season. However, Thornton and powerhouse Scarborough present challenges for his squad. Look for Windham Softball to enter the playoffs this season.

Athlete of the week - Danielle Tardiff

The Aroma Joe’s athlete of the week is Danielle Tardiff, a junior at Windham High School. She plays softball (pitcher/first base) and field hockey (goalie) and enjoys hanging out with friends and going on adventures.

Balance between sports and school is easy “once you figure out how to do it,” Danielle said. “It helps you prepare for later in your life.”

“Danielle is a big reason why we are off to a positive start. Dani has been a force in the circle as well as the plate. She is hitting all her spots with her fastball. She is a great teammate to all,” said coach Travis Demmons.

“I have learned that teamwork really helps you get perspective on life and you learn how to work in a group setting. Being on a softball team for so many year, you get to really know the girls and it brings you closer to everybody in your life,” she said.

When she graduates, she plans to go to college and major in sports management somewhere in New England.

Danielle lives with her parents, Candy and Patrick, and her sister Courtney and her fiancé Steve, Danielle’s niece Rylee and a dog named Abby.
Posted by Michelle Libby at 2:00 AM No comments: 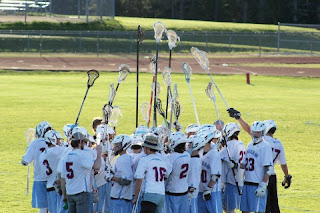 On a fabulous night at Windham High School stadium the Eagles dominated against the Noble Knights ending the game with a score of 22-0.


“I think the team has a great group of guys, working hard and working together and they are off to a nice start,” said coach Pete Small.

Before the game, for the first year, seniors recognized teachers who have influenced their education over the last 13 years.

“This is the first year that we have recognized teachers. We intend to make this an annual recognition. The coaching staff and the team spend a fair amount of time discussing conduct, character, gratitude, etc.  We have always placed academics the first focal point,” said Small.  “Our feeling was that as the seniors are approaching graduation, this would be an opportunity for them to demonstrate gratitude to those who have helped them reach the place where they are now.  Obviously their family is at the top of that list, but so many people within education have contributed to their development.  Each senior took time to nominate and prepare a reflection of an educator who had a dramatic impact upon their development.  The only requirement was that they could demonstrate a meaningful impact on their development that they would carry with them beyond high school, beyond the field and into their community.”

“We recognize outstanding educators who have left an impact on their students with growth in the classroom and the community,” said athletic director Rich Drummond.

“Windham High School, and the entirety of RSU14, is blessed to have so many incredible educators who contribute to the progress of kids over their 13 years in school, that was nice to see these guys provide a sincere thank you to that great group of educators,” said Small.

Athlete of the week - Dylan Koza

Senior Dylan Koza is the Aroma Joe’s athlete of the week. The 18-year-old plays football and baseball. He also enjoys snowboarding, disc golf and hiking.

“Dylan has been a focal point with some of our early victories. He’s coming back from a serious football injury with a great attitude. He is a pleasure to coach,” said coach Brody Artes.

He finds the sports/school balance easy. “Sports helps me to stay disciplined and to get school work done. His belief of teamwork is “that it’s essential in order to win,” he said.

This fall he will attend the University of Maine for chemical engineering.

Dylan is the son of Michael and Christie Koza and has a brother Brendan.
Posted by Michelle Libby at 2:00 AM No comments:


Last Sunday, the graduating class of 2016, friends, family and running enthusiasts gathered for the first annual Project Grad 5K. The race was held at Gambo Road fields and on the Mountain Division Trail. Headed up by Meesh and Mike Preston, the event raised $2,000 for a chem free activity after graduation. 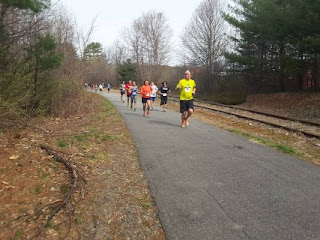 Project Graduation has been keeping graduated students from partying inappropriately after graduation and then engaging in risky behaviors for more than 20 years. Students choose from a few choice what they would like to do and volunteer parents raise money to make it happen, from all night cruises to whitewater rafting, the goal is to provide the fun at no cost to the students. 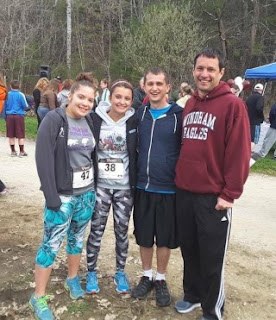 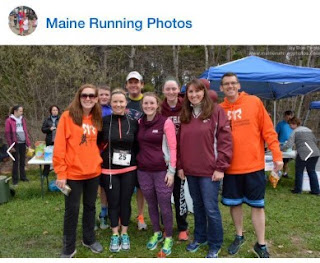 “I want to say thanks to the community for contributing to this fundraiser. I want to make it an annual event for each graduating class, to help them go on the project graduation trip. A Chem-free event is very important to my family,” said Meesh Preston. Meesh volunteered to continue holding the event until 2019 when her son graduates. Her daughter Julia graduates this year. 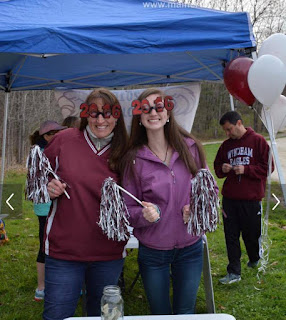 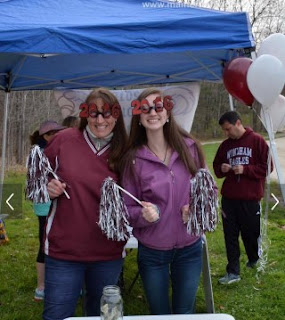 The next Project Grad 2016 event is a pickleball tournament at Windham High School on May 21. For more visit, www.facebook.com/events/262559044084050/. To help in other ways, returnables can be brought to Patman's and tell them to put the money on the WHS project grad account or donations can be sent to Windham High School ATTN: Project grad committee. 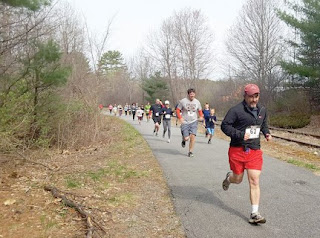 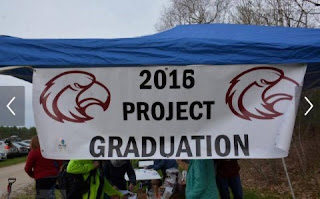 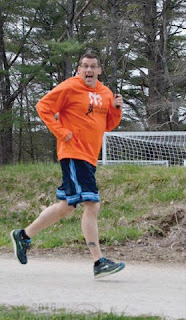