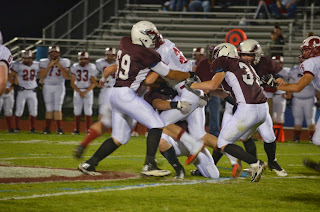 Bangor started the game off with the first touchdown during the first few minutes. However, Windham responded with a throw from Tyler Johnson to Tanner Laberge and then followed up with a connection to Liam Sullivan. Windham’s line stayed strong and showed they were here to play when a failed snap occurred from Bangor giving Windham the ball on the 31-yard line. Johnson’s throw to Laberge was good and Griffin Jacobson ran with the ball for the first down. Liam Sullivan ran up the middle for the touchdown and Josh Dugas made good on the kick making the score Windham 7- Bangor 6.

Beginning of the second quarter, Bangor was penalized with encroachment at the 1-yard line with a loss of yardage on fourth down. Bangor was brought down by Petty and Windham took over at its own 1-yard line. Liam Sullivan ran 80 yards for a touchdown. Dugas’ kick was once again good, moving the Eagles further ahead. Windham’s fake punt was turned over and Bangor took over possession of the ball. 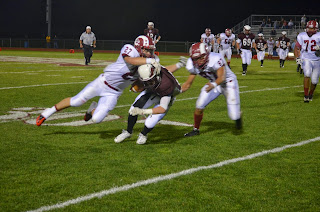 Bangor’s quarterback threw and the pass was intercepted by Tanner Laberge, who managed to be in the right spot at the right time while in the end zone with an illegal hit in the head called against Bangor. At the end of the first half, the score was Windham 14 –Bangor 6. 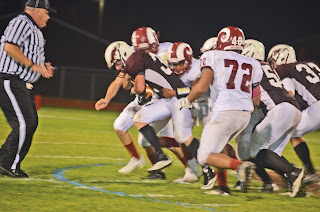 With 8:15 on the clock into the third quarter, senior Liam Sullivan ran in for a touchdown. Dugas was also 3-for-3 on his kicks bringing Windham’s score up to 21. These results should have made visiting Bangor believe that they should pack up the bus and go home. However, it only took one play to turn the tables. With Windham’s turnover of the ball on its own 3-yard line the team found out how true this statement could be. Bangor’s player was stopped short by Griffen Jacobson but only briefly before they were able to score a touchdown and make good on their kick.

Windham’s snap slides between the legs of Josh Dugas and Bangor makes good on a touchdown with the 2-point conversion failing with the help from­­­ Eric Webb. However, closing the score gap with Windham 21 – Bangor 19 leading into the fourth quarter, Windham received penalties stalling any movement up field and a high snap to Dugas resulted in a short punt. Bangor took over possession of the ball on the Eagles 48-yard line. The Rams are able to connect moving down field and score another touchdown with the 2-point conversion successful this time around, giving Bangor the lead for the first time in the game. 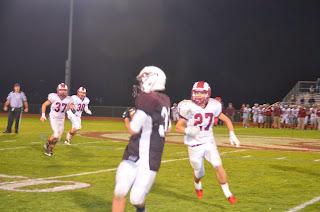 The Eagles didn’t give up the fight and responded with Zack Davis for a long drive down field, but were unsuccessful when the ball was tipped by Bangor in the end zone intended for Davis once again. In the end, Bangor was able to run the clock down and win the game. This game was high energy but with three unanswered touchdowns by Bangor, the Eagles were unable to stay on top.

"Football is a humbling sport," said Windham coach Matt Perkins. "A lot of the mistakes that happened, they happened because we were kind of coasting. The game is 48 minutes for a reason, and you´ve got to play 48 minutes." "We had some kids who really played well," Perkins said.

"It almost looked like whichever team ended up with the ball last was going to win the game," said Bangor coach Mark Hackett. 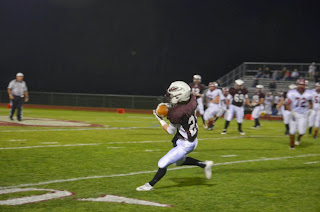