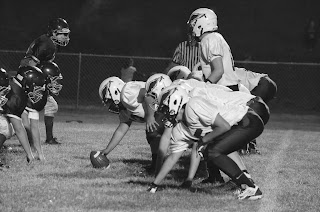 Windham Middle School varsity football team faced Noble in Berwick last Saturday night. It was homecoming week in Berwick and the Eagles faced off with the Squires on a crisp, foggy and damp night. Windham ended up losing in overtime 22-20 after facing a tough night with calls being made all over the board by the referees.
Noble came out strong running the ball, but was stopped by Windham's defense in the first half of the game. The Windham Eagles charged back and Hunter Coffin scored a 28-yard touchdown thrown by Tanner Bernier to put Windham on the board first. Through the fog, Noble came back running the ball once again and facing a long fourth down in which they pulled off a double reversal and scored a 22-yard touchdown. 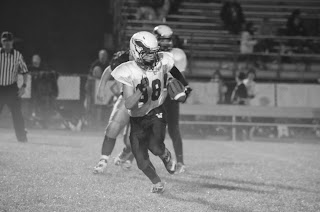 After half time, Windham had three touchdowns taken away due to penalties called. However, Nazari Henderson was able to make it to the end zone for a 33-yard touchdown run. Tanner Bernier threw to Hunter Coffin for the two point conversion, bringing the score to 14-6, Eagles on top.

With time running out Noble’s offensive line never gave up and they were able to capitalize from a Windham turnover and tied the score at the end of regulation; therefore, pushing the game into overtime. The fans on both sides were excited and the adrenaline pumped in the stadium. 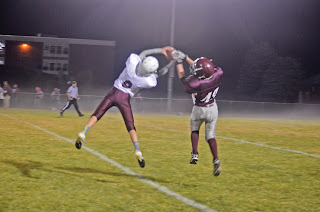 This loss puts the Windham Eagles into fourth place. On Saturday they will face unbeaten Bonny Eagle. The game is under the lights at the Windham stadium. 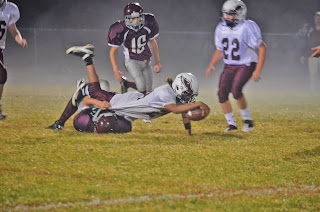 Posted by Michelle Libby at 4:30 PM